The nest of Black Eagles

A streak of five consecutive victories is more than enough to talk about Besiktas, the Turkish club in which Allen Iverson played.

Besiktas Sompo Japan is on a roll. After losing its first game in Basketball Champions League is worth noting that the team has enjoyed a flood of five victories. It’s still early in the season but they are emerging as one of the title contenders.

After winning FIBA EuroChallenge back in 2012, Besiktas is pursuing its second continental title. So, as we did before with Olimpija Ljubljana, we believe it is time to review the history of the Turkish club.

The center is considered as the best Turkish ever played the game. Aydan was also the first Turkish to be selected for the All-European team in 1981. In the same year, he led his country to the Balkan Championship.

In his only season with the team, Besiktas finished first in the regular season but the favorites couldn’t win the title.

‘Mister 153’ is another notable name in Turkish Basketball. Despite he played for Besiktas in several stages, he is well known for what he accomplished defending Fenerbahce‘s jersey. In 1988, Kunter scored 153 points against Hilalspor. Later on, he would be named Besiktas head coach.

Besiktas retired point guard’s jersey despite having played in Akatlar Arena just one month and a half.He was the first NBA star to land in Europe after the lockout began. Williams averaged 19.7 points and 6.4 assists -50 points in a game included- before going back to New Jersey. 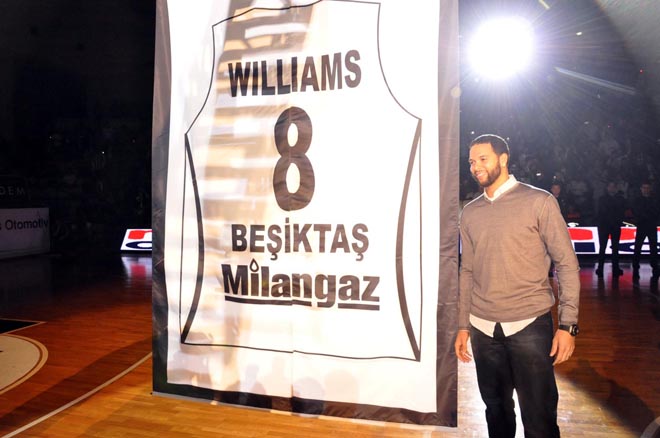 With Deron Williams back in the NBA, Besiktas decided to sign the Puerto-Rican. Arroyo led his team to win the Turkish Cup, the EuroChallenge and also the Turkish Super League. An unbelievable season where he was named Finals MVP. He decided to move to Galatasaray after the historic campaign for Besiktas.

Iverson is probably one of the most talented players ever. Almost eight months after his last NBA game, The Answer signed with Besiktas in what it was a massive event. Despite the expectations, he only averaged 9.3 points and 3 assists in three EuroCup games.

A calf injury forced Iverson to return to the USA in February. He would never play professional basketball again.

In recent time, Besiktas has served as a bridge to bring great stars to Europe. Most of them played just a single season -or less- but the fact is that they played in Istambul for the team. We’ll see if a success in the Basketball Champions League makes the Black Eagles fly again.