Brown, Banks, Ledo, Thomas and Fall make up BCL Team of the Week

Adrian Banks, Brandon Brown, Moustapha Fall, Ricky Ledo and TaShawn Thomas made the cut for the Basketball Champions League Regular Season Round 8 Team of the Week, BCL announced on Thursday.

Per Basketball Champions League: “Playing a game that has potentially big implications in the standings at home can sometimes generate more pressure on a player than a road game.

However, the five players who have earned a place on Team of the Week for Gameday 8 not only managed to handle this sort of pressure, but also delivered performances that led their respective team to important home wins.

Let’s have a closer look at each one’s exploits this week:

Iberostar Tenerife arrived in Russia on Tuesday as the only undefeated team in the competition so Nizhny knew they would need to bring their very best game to stand a chance to hand the Group C leaders their first loss.

Brandon Brown provided exactly the guidance and inspiration Nizhny needed to achieve that feat and reach a famous 75-72 victory. He scored a season-high 26 points on 9 of 13 shooting from the floor, dished out 5 assists, came up with 4 steals and brought down 2 rebounds for an efficiency rating of 28.

The Nizhny point guard has earned a spot on Team of the Week for the second time in his debut BCL season, as he was also on the Gameday 2 team.

The 30-year-old American has now matched Vladimir Dragicevic, who also won the distinction on two occasions while playing for Nizhny last season.

? O Captain! My Captain! 16PTS (88%FG) for @HappycasaNBB‘s captain @iadrianbanks in the first half! #BasketballCL

Just like Brown, Banks is also making his second appearance on Team of the Week this season having previously earned a spot on the Gameday 2 team, when he went on to also claim MVP honors.

On Wednesday night, the veteran guard poured in 16 points in the first half of Brindisi’s home clash with Neptunas Klaipeda to keep his team close to the Lithuanian side.

After the break, Banks took on a more organizing role as the Italian side vastly improved their defense and scored in transition, and he directed Brindisi’s comeback effort en route to a 96-82 win.

Banks registered a performance with an efficiency rating of 27 as he finished with 22 points on an almost flawless 10 of 11 from two-point range, 6 assists, 2 rebounds and 1 steal.

Ricky Ledo registered a big double-double in points and rebounds on Gameday 7 but it was not enough to lift Anwil over AEK.

So on Tuesday night, the American winger delivered an even more well-rounded display to make sure the Polish team outgun RASTA Vechta at home, 103-92.

The 27-year-old Ledo poured in a season-high 27 points on 9 of 17 shooting, grabbed 8 rebounds and dished out 7 assists. He also came up with a steal to post an efficiency rating of 33, the highest among all players on a winning team this week.

Ledo has earned a spot on Team of the Week for the first time and has also become the first ever Anwil player to claim this accolade in the Polish team’s BCL history.

It is not a secret that Hapoel Jerusalem have a great roster and the fact TaShawn Thomas has become their third player this season to earn a spot on Team of the Week reflects the Israeli team’s wealth of options.

Thomas delivered his highest-rated display – with an efficiency rating of 27- in this BCL campaign on Tuesday night, as he finished with a near double-double of 18 points and 9 rebounds and added 3 blocks, 2 assists and 1 steal.

The power forward provided during his 29 minutes of action the reliable, sturdy presence on both ends of the floor that Hapoel needed to pull away from Bandirma and secure an 83-72 win at home. 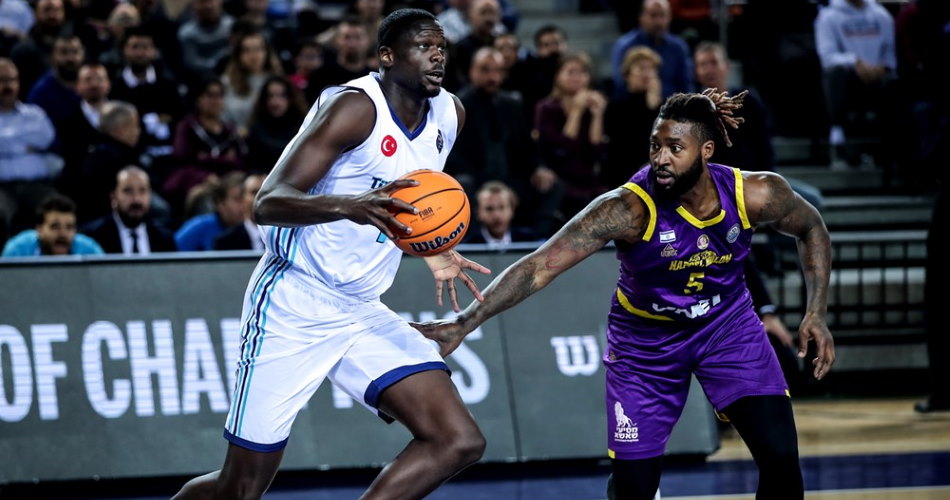 It is impossible to ignore Moustapha Fall when he is on the floor, and not because of his towering 2.18m (7ft 2in) frame, but because of his dominant presence in the paint and huge impact on both ends.

On Tuesday, the Turk Telekom center showed he can be just as effective against an extremely mobile, undersized frontcourt such as that of UNET Holon as he collected a double-double of 15 points and 10 rebounds but also added 4 assists, 1 steal and 1 block.

The Frenchman registered an efficiency rating of 28 in just 22 minutes on the floor to help the Turkish side pick up a comfy 85-71 victory and remain join-leaders of Group A.

Fall is the second Turk Telekom player to earn a spot on Team of the Week, after his frontcourt partner Kyle Wiltjer claimed the distinction on Gameday 5 and went on to also be named MVP.”

Luka Doncic forced out of the Slovenia NT

Giannis Antetokounmpo: “If LeBron, KD, and Davis came to Milwaukee, I would have been ok with that”