BCL Team of the Month for October: Spissu, Gray, Wiltjer, Jerrett and Boutsiele

Marco Spissu, Steven Gray, Kyle Wiltjer, Grant Jerrett, and Jerry Boutsiele stood out among a number of big performances, earning their spots in the Basketball Champions League Team of the Month for October

The first two weeks of action have been completed in the Basketball Champions League and there have been quite a number of big performances by players.

Five them, however, stood above others and were named to the Team of the Month for October – Marco Spissu, Steven Gray, Kyle Wiltjer, Grant Jerrett, Jerry Boutsiele.

The first Team of the Month for the 2020-21 Basketball Champions League season was always going to be a big occasion, but it’s also big in terms of size and absolutely huge in terms of performance. 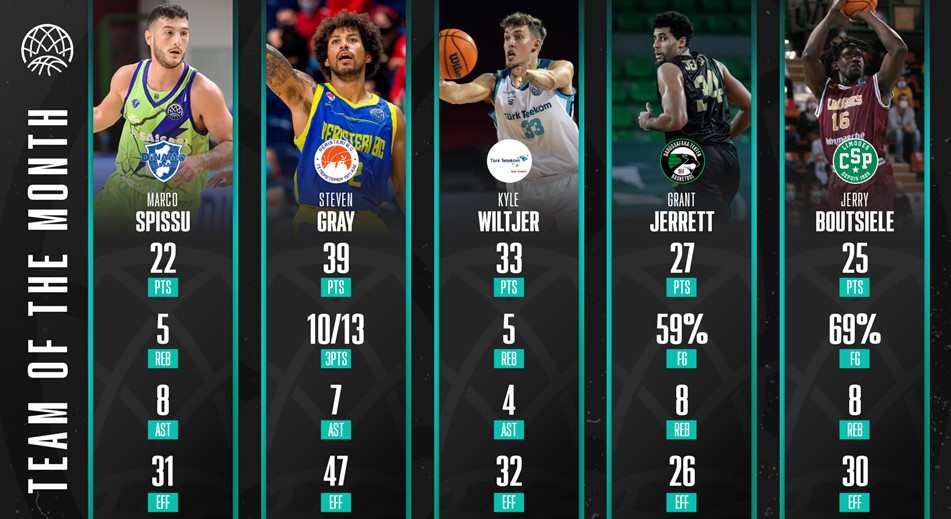 Size matters therefore on Team of the Month for October, which includes one point guard, one wing player, two power forwards and one center. The five of them combined for a stratospheric PER of 166 between them and set a few new all-time competition records in the process.

Dinamo Sassari’s Marco Spissu, Peristeri’s Steven Gray, Turk Telekom’s Kyle Wiltjer, Grant Jerrett of Darüssafaka Tekfen,and Jeremy Boutsiele of Limoges CSP have been named on the team, for their stellar displays over the two opening weeks of the Regular Season.

The Sassari floor general orchestrated his team’s win over Galatasaray on opening night as he stayed on floor for 37 minutes and collected 22 points on 6 of 9 shooting from downtown, 8 assists, 5 rebounds and 1 steal.

Spissu tied his personal BCL best with his 6 made triples, but more importantly he became the first player in the competition to register three games of at least 20 points, 5 boards and 5 assists since the start of the previous season.

The Italian point guard’s efficiency rating of 31 on the night is his second-highest in the BCL while his 22 points are just two short of his BCL career-high of 24.

Gray led Peristeri to a famous road win at Rytas on Tuesday but his individual performance will likely be remembered for longer than the result, as his PER of 47 set a new record for the highest efficiency rating in a single BCL game, breaking Kiefer Sykes’s previous record of 43 from January 2019.

Peristeri outscored Rytas by a monstrous 28 points during the 29:40 minutes the experienced swingman spent the floor, as Gray scored 39 points on 13 of 18 from the field.

Gray also tied Jimmy Baron’s record from December 2016 for most made threes in a single BCL game, with 10 made triples. The Peristeri player however shot an almost flawless 10 of 13 from beyond the arc, while Barron needed 15 attempts.

The new PER record holder also became the first player in competition history to collect at least 25 points, 5 assists and 5 steals in a single game. Gray’s final statline included 7 assists, 5 steals and 3 rebounds.

In a game of runs, every team can use a player who is consistent from the first to the final second and Kyle Wiltjer provided exactly that sense of certainty to Turk Telekom on Tuesday night, leading them to a hard-earned win over Hapoel.

The Canadian power forward collected 33 points on 11 of 16 from the field and added 5 rebounds and 4 assists in the 32 minutes he spent on the floor.

Thanks to his 33-point tally on Tuesday, Wiltjer has become the second player in BCL history, after Rion Brown, to score 30 or more points in three different games. It is rather safe to assume he is a very strong candidate to set a new record, with four such games, before the season is over.

Darüssafaka’s resilience was put to the test by Oostende in their maiden BCL game and Jerrett, who was also making his debut in the competition on Wednesday, had the answers to all the tough questions.

The 27-year-old American came up with 27 points on 10 of 17 shooting and added 8 rebounds, 1 steal and 1 assist, which he dished to Dogus Özdemiroglu for the dagger-triple 12 seconds from the final buzzer.

Jerrett has become only the third player to score more than 25 points and grab more than 5 rebounds in his first game in the BCL.

The Wednesday night clash between BCL debutants Limoges and Igokea was a very unpredictable — and highly enjoyable — game of basketball but the French team seemed to have the edge whenever Boutsiele was on the floor – in fact his plus/minus was +15 points.

The 27-year-old big man, who scored crucial back-to-back baskets to bring his team ahead 76-73 with 58 seconds remaining, finished with 25 points on 11 of 16 shooting (all from two-point range) and added 8 rebounds and 2 blocks.

Boutsiele became the second player on a French team in the BCL to score 25 or more points without attempting a single three-pointer, after Nanterre’s Julian Gamble in November 2018.