Rick Pitino is back at Panathinaikos OPAP and right from the start upgraded Jimmer Fredette on the court. Against KIROLBET Baskonia last week, the BYU alumni took 17 shots in about 29 minutes, both season-highs.

Many assume Pitino will continue trusting his fellow American, even though arch-rival Olympiacos is up next. Worth just 1.74 credits with a big outing ahead if he keeps possession of the ball. We don’t usually bet on players that attempt many shots without further stuffing their stat sheet. The risk is yours to take.

– Taking into account a recent EuroLeague pick, Khimki Moscow Region’s Anthony Gill at 1.90 recently registered 26 PIR against Fenerbahce Beko and averaged 18.3 in his last three games. Keep him in mind.

– Omri Casspi is set to get back in action and is available once more, but can be a dangerous addition after being sidelined for a couple of weeks.

– Nando De Colo is still out with Fenerbahce Beko gearing up for a home match opposite to ALBA Berlin. Kostas Sloukas is covering. Derrick Williams is trending upwards as well averaging 21.5 PIR in his last two outings.

– Vladimir Micov will miss two to three weeks. Several AX Armani Exchange Milan players might improve their scoring outputs in his absence including Michael Roll or Nemanja Nedovic. Both are creative-minded, not direct replacements for Micov, but somebody has to take on his shots. If you really need additions, both are available at a low price.

Micic back in our team

Adding Luis Scola was not our best moment. Bojan Dubljevic upped his game after we removed him from our squad with the 39-year-old Argentine going the opposite direction. We hope our bad luck does not persist.

In Cory Higgins’ spot, we placed Vasilije Micic reinserting him in our team. Anadolu Efes’ Serbian guard is coming off a bad stretch of two games, but we bet on him storming back this week.

Our expensive addition forced our hand in favor of ALBA Berlin’s Marcus Eriksson. Back in Aito Garcia Reneses’ rotation after his injury, he has been impressive. We believe he will add on his positive performances even though his team will collide with Fenerbahce Beko at Istanbul.

Here is our fantasy team for Round 12: 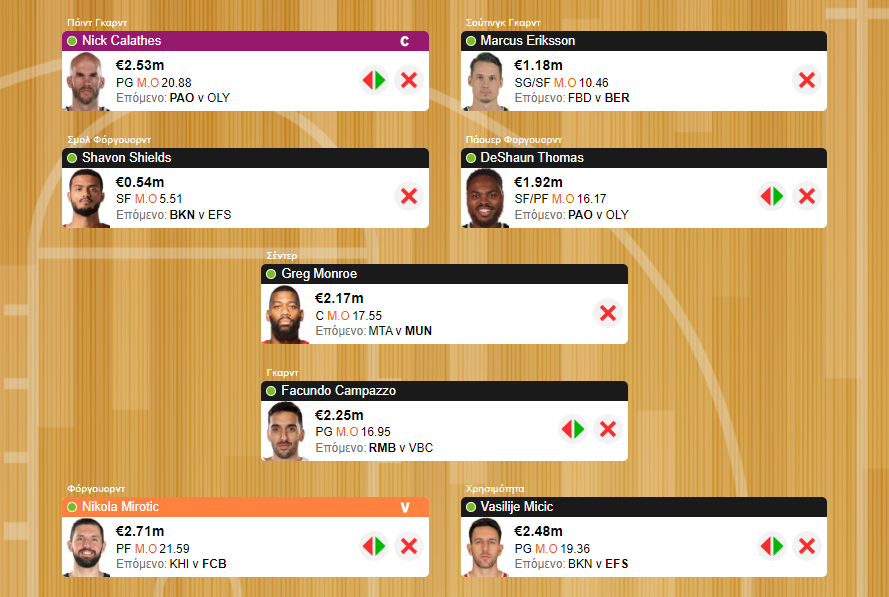