Fantasy: Shane Larkin all the way

Shane Larkin had come back from injury with a relatively manageable price. He now costs 3.78 but he deserves to give everything you have in order to acquire him. Of course, you should appoint him as captain. You don’t want to lose a, let’s say 40 PIR and regret it afterward, right?

Larkin has proven himself as a top-notch Fantasy pick and so has Nikola Mirotic. We assume that one way or another, they have both found their way to your teams. Even if they haven’t, you can get rid of another player of midrange value in order to acquire this powerful duo. They are the most expensive and also the best.

Of course, you should find the cheap “counterweights” in order to accommodate all good players on a roster with a limited budget.

There are possibly one or two good choices at “5” or when it comes to “usefulness,” like ASVEL center Tonye Jekiri or Zalgiris Kaunas center Jock Landale. They both cost 1.50 and give plenty of PIR points for their price. We wouldn’t propose them individually but they make a good combo with Larkin-Mirotic or one of the two.

Landale registered 30 PIR in the game against Zenit St. Petersburg and maybe he’ll want to prove himself against Barcelona as well.
Jekiri began the season in an impressive manner (we had suggested that you get him at a small price. We sold him for a high price, making a profit) and has now a steady average and plenty of playing time to give you points.
There’s also an extra solution in the face of Baskonia forward/center Ilmane Diop who EuroLeague also proposed him as an option. He costs 0.40 and has steadily produced around 10 PIR. He might be the ace on your sleeve this week.
We would also propose two players from CSKA Moscow, apart from Mike James:
– Daniel Hackett: Yes, his performance has seen some serious ups and downs. But he costs 1.19 with more positive than negative outbreaks and a certain role on CSKA.
– Darrun Hilliard: More or less the same applies to . He hasn’t been that good on Fantasy as Hackett but has had two great games out of CSKA’s last three matches and we also note the “Alba factor” that has justified our choices in the past.
Our team: 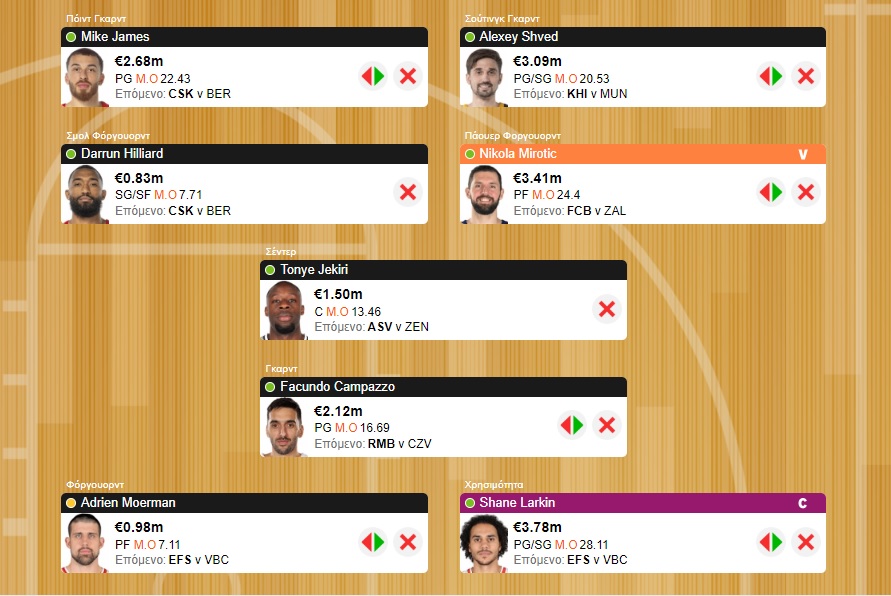 On to our team. We have decided to make some radical changes. For the first time this season, we left out Panathinaikos guard Nick Calathes who has a difficult game against Fenerbahce Beko. The game is expected to be a low-scoring one and this will affect the player’ individual performances.
We also removed Fenerbahce center Jan Vesely since we bought him at a low price and sold him at 1.90 to get CSKA Moscow guard James and Jekiri. As you can see, how now have Larkin, Shved, James and Mirotic who are the hottest “Fantasy” players. We also kept Real Madrid guard Facu Campazzo who has been solid. We are looking for extra points through Jekiri, Moerman and Hilliard.