This week will be a little difficult for EuroLeague Fantasy since the Round begins on Monday. So how do we pick some safe options?

Round 26 of the EuroLeague begins Monday (24/2) with the Real Madrid – Panathinaikos game instead of Thursday as usual. So, even though there may be injuries until Thursday you have to make the appropriate changes on your team a couple of days before.

And you can’t go only with Real Madrid or Panathinaikos players.  Still, considering the fact that forward Anthony Randolph is out, we suggest forward Trey Thompkins or 17-year-old center Usman Garuba. The latter is particularly cheap at 0.53 points and could be an ideal option to patch up some “holes” on your roster.

If you want to begin your team with a major change, we propose picking up Fenerbahce star guard Nando De Colo. And we urge you to get him now because his Fantasy price has dropped to 1.60 points after a stretch of mediocre performances, excluding last week’s game vs. Real Madrid.

De Colo hadn’t registered a PIR above 20 in seven games before the loss to Real. And “20” is the number we are looking for. Fenerbahce plays at Valencia, a place where De Colo spent a large part of his career and has a certain bond with it, so he might get further inspired to produce the lot.

Fener will also be out for “revenge” after losing to Valencia at home in a heartbreaking fashion.

We are keeping the same team, more or less, with the last round. Our only change is switching Anadolu Efes guard/forward Krunoslav Simon with Bayern Munich forward Vladimir Lucic. We don’t want to take any risks for the reasons we mentioned above. Shane Larkin won’t play and Simon may produce but there might be a last-minute change that will spoil our plans.

So we go with Lucic. We like him as a player, he’s at a solid price, and he registers numbers. The Serbian forward plays a lot of minutes and has a multifaceted influence on Bayern’s game. 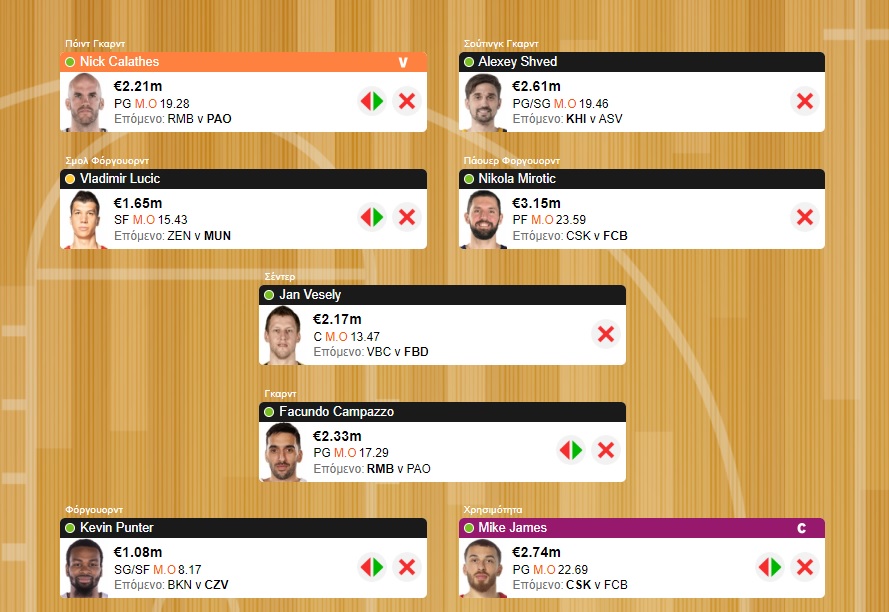