With Giorgos Bartzokas back at the helm, intriguing options from Olympiacos come in play.

Olympiacos with Giorgos Bartzokas in charge and four more bigs are included in our fantasy tips ahead of the upcoming double-game week in EuroLeague.

The Reds will host ALBA Berlin on Tuesday and the returning head coach will likely rely on familiar faces. Vassilis Spanoulis and Kostas Papanikolaou fit the specifications and are available at a low price.

On Sasha Vezenkov, he is coming off a tremendous outing. Gained additional playing time with Milutinov not fully ready, but Bartzokas can extend his upgraded role opting to ride on generated momentum. The 24-year-old forward is currently rated at only 0.53 units.

Four bigs to bet on

Four forward/centers look hot lately and can be obtained without a large investment.

Up first is Real Madrid’s Trey Thompkins. Despite nearly departing in the summer, stayed and since reclaimed the trust previously put in him. Played over 32 minutes in his past couple of outings producing 20 points per appearance and 17 fantasy points per game. Currently costs 1.23 units.

Adreian Payne is back in action for the last four games scoring in double-digits in every occasion. Coming off a 26 PIR earning the most minutes among the LDLC ASVEL Villeurbanne players. Available at 1.28.

Maccabi FOX Tel Aviv added Jalen Reynolds as injury relief with Tarik Black sidelined. After getting to know his teammates went for 21 PIR playing 20 minutes in his second game, posted the game-winning points for Giannis Sfairopoulos squad as well. He is a good player. Able to pick him at the power forward position is an added bonus. Valued at 1.15.

Jan Vesely was a great Fantasy player last year, but injuries have slowed him down. As a result of not being fully fit at any point of the season, hasn’t produced much in his eight appearances so far. With Joffrey Lauvergne out of Zeljko Obradovic’s plans, Ahmet Duverioglu injured and Malcolm Thomas forced to play at the “5”, we can’t deny Vesely despite his struggles. At 1.39 can evolve into a solid addition.

Following our own tips, took on Reynolds and Vesely that fit in our budget understanding that the Czech might not pay out immediately. Our bet includes inserting him before a potential stocks rise with a spectacular performance.

As for our captain, we are unable to expect a second straight poor outing from Nick Calathes or Nando De Colo. Panathinaikos OPAP’ star is our pick. Hopefully he vindicates us showing his true colors in the start of the double-game week. 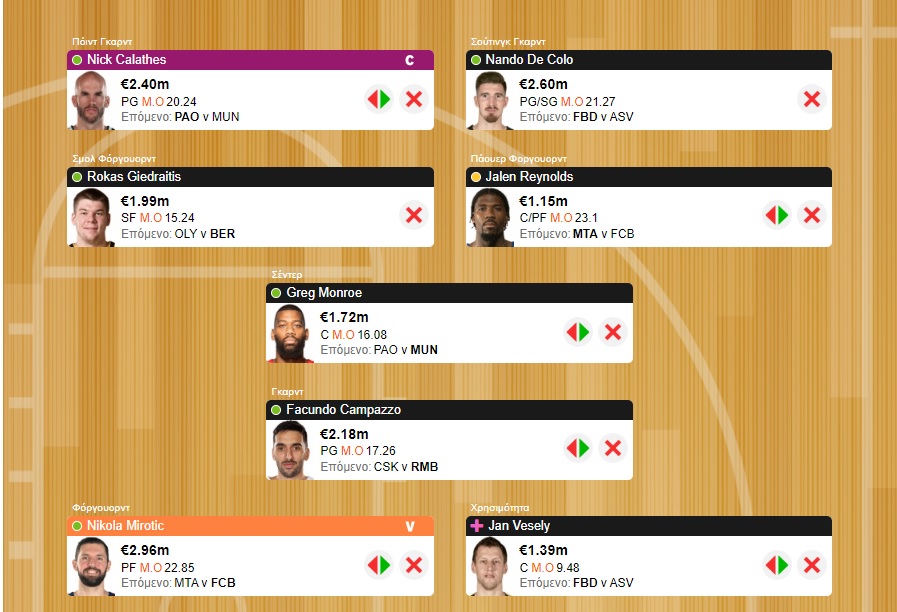