Appointment with history: When Theo Papaloukas and Greece ruled the continent

Theo Papaloukas talked to FIBA.basketball as they went back 15 years, all the way to the 2005 EuroBasket to reminisce, analyze and tell the story of Greece rising up to the podium.

Looking at it simply from the numbers’ standpoint 15 years later, it seems crazy that a team scored 64, 56, 67, 67, 66, 67 and 78 points in their seven games in Belgrade and still managed to survive all the challenges en route to their second ever triumph in the continental championship.

“It felt like somebody or something wanted to help us win that event with the way things were going,” Theo Papaloukas told FIBA.basketball thinking back to that warm September in Serbia and Montenegro. 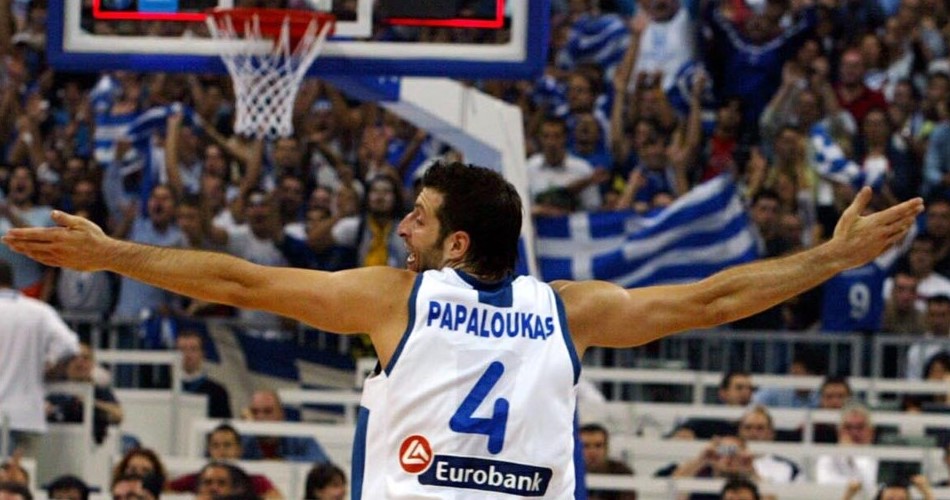 “This is what makes you a champion. Just finding a way to win on a bad day. It’s easy to defeat somebody when you are on a good day, but if you can do it on a bad day, that’s how you create a championship winning team. We had that. We spent so much time together as a team in Belgrade, and we talked all the time how everything was going our way with the results, with us making it out of the group stage in the last game, and how the favorites were eliminated in the other part of the draw. We had big faith. That was the thing for us.”

The part about winning on a bad day? It seems that Greece had six bad days and the good one came at a perfect time, right in the Final.

The part about making it out of the group? Greece opened the tournament with a 64-50 win over France, but then lost 68-56 to Slovenia a day later. With Slovenia sweeping the field, Greece were in danger of dropping to the bottom of the standings in case they lost their last Group C game, against Bosnia and Herzegovina.

It wasn’t a likely outcome, but holding a slim 43-41 lead going into the fourth quarter, doubt was probably starting to lurk somewhere in the back of the Greek locker room. However, doubt was always going to be used as an ignition factor with this generation. Bosnia and Herzegovina were blown out 24-9 over the last 10 minutes to book a date with Israel in the Play-Offs. 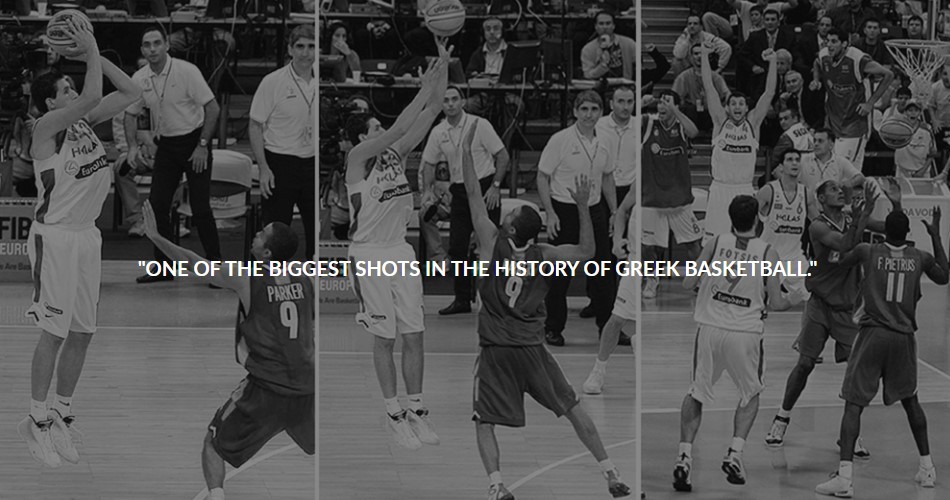 With the path clearing up, the biggest remaining hurdle was in the their Group Phase rivals, France. The epic Semi-Finals clash in the packed Belgrade Arena saw France claim a seven-point lead with just over 40 seconds left to play.

“I was in foul trouble, so I came back into the game with two minutes remaining, and I had four fouls. Of course, I wanted to be on the court for the last shot, but that’s the part I mentioned about the faith we had in this team. I knew I had to commit my fifth foul to stop the clock and send France to the free throw line. That’s what we all understood, the team effort was the most important thing, not our personal goals,” Papaloukas explained.

You can clearly see what he was talking about if you re-watch the game. Committing that fifth foul to stop the clock was heartbreaking for the Greek point guard, but as soon as he looked over to the bench, he had his hands ready to cheer on the next guy off the bench.

“With all the faith that all the people around the team had, we made winning games like that one normal,” he said.

Even when Papaloukas fouled out, Greece still had a pair of elite point guards to finish off the comeback against France on the last possession.

“All of us on the team, we were just watching the target and waiting to see how we’ll make it. Nikos (Zisis) created the space with his drive and made the right play with a pass back out to Dimitris (Diamantidis). And Dimitris made one of the biggest shots in Greek basketball history,” Papaloukas described the game-winning shot with pride felt in every single word he said.

Talking to him like this makes you feel like the game just ended and you are taking the quotes right there on the court, immediately after the buzzer, right there amidst the celebrations. That’s how excited Papaloukas sounds remembering the title run, even 15 years later.

“When I think about 2005, these three things come to mind. The moment when I held the trophy in my hands; Dimitris’ three-pointer; and the Final,” he lists.

The Final. Having seen Greece win single digit games against Israel in the Play-Offs, against Russia in the Quarter-Finals, against France in the Semi-Finals, fans were expecting another thrilling encounter against Dirk Nowitzki and Germany in the Final. But it never happened.

“Nobody can handle too much drama,” Papaloukas laughed. 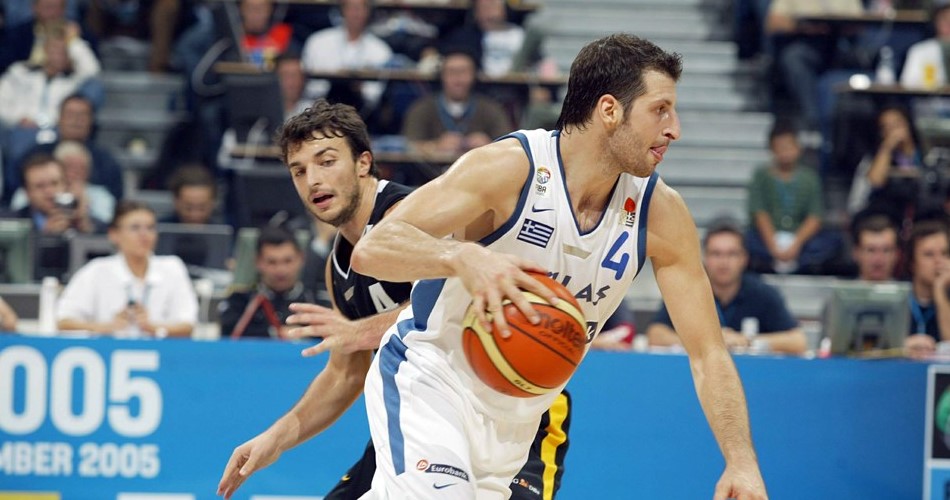 Greece won the Final 78-62, making it a one-way street from the start to the finish line, doing everything the way they planned it to climb the top step of the podium for the first time since 1987.

“The Final was the best thing. Germany were a great team with a superstar in Dirk Nowitzki, but it felt easier for us to play against them. It felt like they had already achieved their goal by reaching the Final, which was way above expectations. On the other hand, we had a meeting appointed with history. And we made it,” he described.

Holding the trophy brings out various feelings in players. Boris Diaw claimed it was a relief, Predrag Stojakovic saw it as a sign of superiority and domination. Meanwhile, for Theo Papaloukas it was a dream come true.

“It really was a dream come true for us. Especially because the tournament was played in Belgrade, one of the biggest basketball cities around, and because so many of our fans made the trip to Serbia. It was a very big thing for us, and winning that trophy helped us grow as players, but also as people, as men,” the guard explained.

Papaloukas finished the Final with a team-high 22 points and 6 assists, earning himself a place on the All-Star Five, alongside teammate Diamantidis, France’s Diaw, Spain’s Juan Carlos Navarro and the MVP Nowitzki.

Teo Papaloukas goes for 22 PTS and leads @HellenicBF ?? to their 2nd #EuroBasket ?

A year later Papaloukas would pick up the first of his two EuroLeague titles, and earn the FIBA Europe Men’s Player of the Year award. He was also selected to the All-Decade Team of EuroLeague, he was the MVP of the Final Four in 2006 and the Regular Season in 2007, picking up a number of domestic titles and awards and another medal with Greece, finishing second in the FIBA Basketball World Cup 2006 along the way.

So where does winning the FIBA EuroBasket 2005 rank in his silverware collection?

“Winning something with your national team makes it even bigger. Like I said, I saw how much we grew as persons and players because of that title in 2005, but once you finish your career you realize how people respect you even more for stuff you did for the country,” he acknowledged.

“Most of the people don’t understand how difficult it is to get to that level, and they sometimes they take success for granted, but when they come by and just say ‘hey, thank you very much for what you did for our country’ – that’s a great feeling. That’s a great feeling. Just the other day, you guys posted (the 2005 Final) on FIBA’s social media. I can’t even tell you how many messages I got about it, because some people watched it again, and the others who were too young in 2005 got to watch it for the first time.”

Back then, Greece were all about outsmarting their opponents. With Papaloukas, Diamantidis, Zisis, Vassilis Spanoulis in the backcourt and coach Panagiotis Giannakis on the bench – good luck trying to read what Greece were trying to do and keeping your own game plan a secret. Finishing the games with less than 70 points scored was not a problem for Greece in their chess matches on the basketball floor. These days it’s a bit different, with a certain Giannis Antetokounmpo on board. 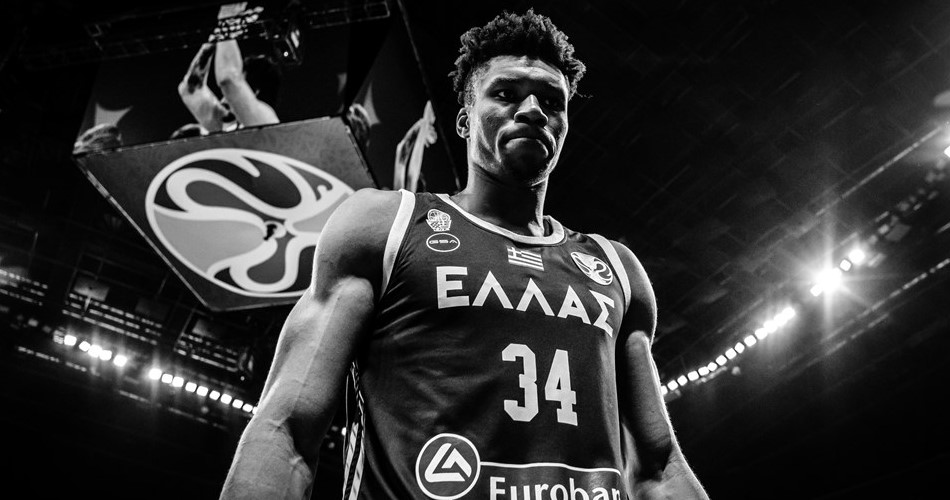 “It’s a luxury to have a player like Giannis on your team,” Papaloukas said.

“But really, it is all about playing to your skill set. We had a specific set of skills in 2005, and we took advantage of it. Championship teams find a way. So when you have Giannis, but also (Kostas) Sloukas and (Nick) Calathes, their way does not have to be similar to what we did 15 years ago. I believe we will be back on the podium very soon, but it’s not just about the podium. It’s about building a new generation of kids, about developing our schools of basketball, and teaching the children how to think on the court, how to outsmart the opponent and how to find their best self. This generation right now, the talent is great, they are hungry for success, so it’s just a matter of time when we’ll be back on the podium.”