FIBA presents a Q&A with David Blatt regarding the 2007 EuroBasket final between Russia and Spain.

In 2007, Russia climbed to the EuroBasket top with David Blatt at the helm. More than a decade later, Blatt looks back on the captured gold medals remembering the two bounces that changed Russian basketball through a lengthy Q&A with FIBA.

That’s exactly what happened to Russia in the closest FIBA EuroBasket Final of the millennium so far, with J.R. Holden’s game-winning jumper taking its time to hang around the rim before dropping through the nylon and into the history books.

Pau Gasol’s buzzer-beating attempt had a remarkably similar path, but stayed out of the rim, giving Russia a mesmerizing 60-59 win in Madrid in 2007.

“That was a very, very special moment for many, and certainly for me, in my basketball coaching life. That FIBA EuroBasket championship was probably one of the biggest surprises ever in the competition,” 2007 Russia head coach David Blatt told FIBA.basketball, reminiscing about the events from 13 years ago.

“The great thing about it was that, despite not many giving us great chances perhaps of even being a Play-Off team, we were throughout the tournament the very best team defensively and one of the two top teams overall, together with Spain. 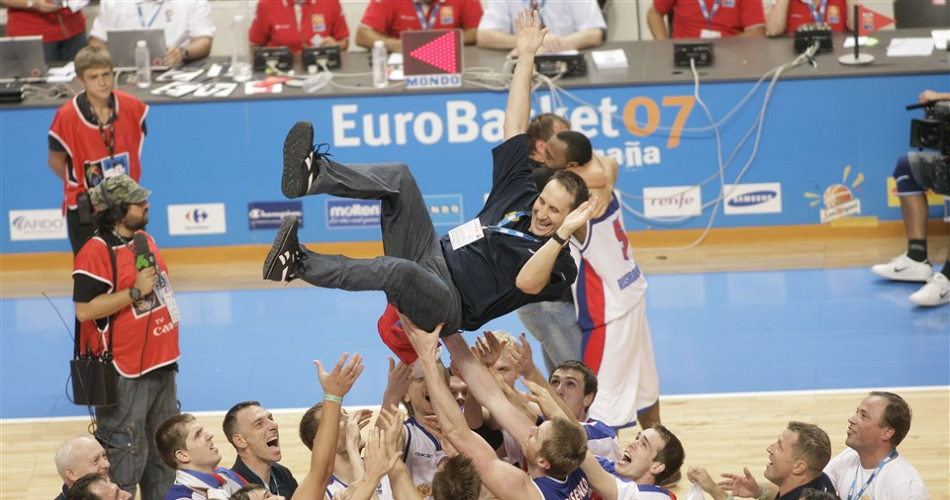 While Blatt went on to win medals with Russia at FIBA EuroBasket 2011 and the 2012 Olympic Games in London, neither was as sweet as the triumph of September 16, 2007 at the Palacio de Deportes de la Comunidad de Madrid.

“We always felt that we had the ability to compete with anyone. We had the kind of toughness mentally and physically that’s needed in competitions that have many games in short period of time, and we grew together as a unit, from game to game, got better and better,” he recalled.

“As our confidence grew, we really entered that game with a feeling that we could do something special. And indeed, that’s what happened.”

Was there a moment where you felt like, “okay, this team could go all the way” during the tournament in 2007?

Our guys were very skilled, but also very smart. We played in a particular way defensively and tactically that required players that could think the game and could utilize the different ways we play in order to take advantage of the weaknesses of the other teams. Or, to take the opponent out of their comfort zone.

That for us was the main message going into the (Final) against Spain, which was a truly great team. When you look at the rosters, it’s not hard to say that. They had so many weapons and of course had a huge advantage of being a home court team with overwhelming fan support. We knew going in that our job was going to be to take them out of their comfort zone and make the game close. And hope and believe that we could bring them to the point of discomfort. And that’s exactly what happened. 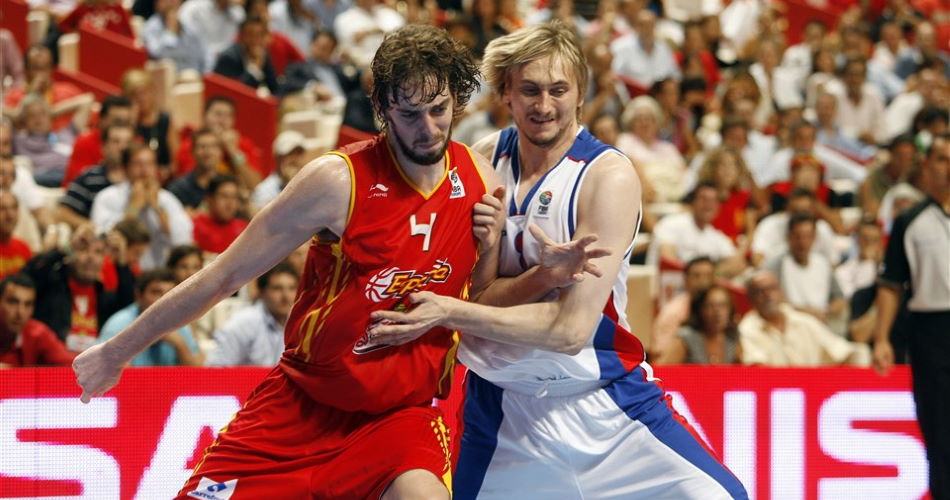 They were leading the game significantly in the first half, but we just kept talking about making it close, making it close… putting the pressure on them and see what happens. We got back into the game late in the first half, after having been down 13, 14, 15 points. By halftime, the game was much closer. And in the second half, we played exactly the game that we wanted to play. Using different kind of defensive looks and playing deliberately and intelligently on offense, not to allow them to play fast, free-flowing basketball. Because if we did, we couldn’t win the game. They were too talented. Too deep for us, roster-wise. But we made them play our way.

They eventually felt the pressure. We made the right plays going down the stretch, and were able of course to bring it to the point after a few great defensive steals by Khryapa, then Kirilenko, then Khryapa, but he fouled out, then Kirilenko and then J.R. Holden. Before he made the big shot, he made a tremendous strip and steal on a low post turnaround by Pau Gasol. That’s what gave us the chance to hold the ball for the last shot.

That last shot by J.R. Holden… Was it like in the movies? Was everything in slow motion? Was the silence from the stands deafening?

That’s a great question. J.R.’s shot was a carbon copy of a shot that I actually witnessed in person, by Sam Jones in an NBA Final game against the Lakers in 1969. It was exactly the same shot. From the right side, in between, a jump shot that hit the rim, bounced off the backboard but in a way that it appeared the ball was going away from the rim. I always like to say that the ghost of Alexander Gomelsky put his hand out and swept the ball back into the basket.

But it really was a carbon copy of Sam Jones’ shot that I saw as a kid. I grew up in Boston, he and those Celtics teams, they were my heroes. And what J.R. did to this day reminds me of that shot. This to me signifies the beauty of our game. It crosses all barriers. It’s a game played by people everywhere, it’s loved and followed by people from different countries, cultures, societies, but you still find the same spirit of togetherness, hard work, dedication and team achievement – this is really something that we need in our situation today, in this particular time in the world. We’re in a game or a situation that affects everyone, without consideration of border, nationalities or countries.

Going back to that moment in 2007… I’ll tell you exactly how it happened. J.R. stole the ball cleanly from Gasol. I’ll never forget, and you can see this clearly on the video, he started to run the ball up the court, and I literally ran halfway onto the court, telling him to slow down and hold the ball. Because we wanted to take the last shot. I felt that our chance was to take one shot, take it as far to the end of the clock as we could. J.R. held the ball, and looked to make a play. They came to double-team him, he gave the ball up, fortunately, (Zakhar) Pashutin recognized the situation and saw that the double-team left J.R. He threw the ball right back to J.R. who took another few dribbles to the right side of the court and then pulled up for that famous jumpshot, with only two seconds left on the clock, and also the end of the shot clock for us.

The shot seemed to take a lifetime. The time of the ball in the air… the bounce… the backboard… the ball going through the basket… Seemed like an infinity.

Would you say that the shot completely changed the legacy of J.R. Holden in Russian, and even European basketball? He enjoyed a lot of success in his club career, but was this shot something bigger when you consider the connotations of a naturalized player in a Russian jersey at that time?

You have to know that J.R. is a special guy. I know him personally very well. I just saw him here in my NBA experience. J.R. is a quiet, modest, very strong-willed person. He did have a great professional career, particularly with CSKA Moscow, but this moment for him in Russia was unique. We have seen in the last few decades there are naturalized players that end up playing significant roles for many of the European national teams, but J.R.’s situation, much like mine, as an American citizen who became a contributor for the Russian national team, was kind of unique. Both on social and cultural level. And understand that he was very well liked and accepted in that team, by the Russian national players. That’s why it worked with him. His place in Russian basketball history, without question, is forever. 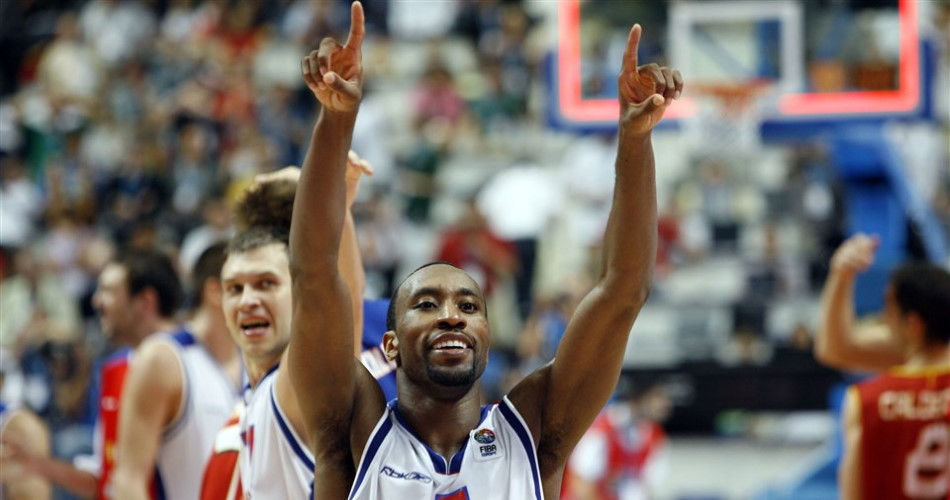 Spain did have a chance to win the game after you took the lead. They advanced the ball with a timeout, set up a play to get Pau Gasol a good look, but the shot was contested really well and it did not go in. How did you feel during that last second play by Spain?

Once J.R.’s shot went in, which was the first time that we led in the game, I felt that there was no way that we could lose that game. That was the feeling in my mind. It just seemed that faith was on our side.

You have to understand the overwhelming surprise of that whole situation – I would go back three steps. Because in the Quarter-Finals we beat a strong French team with Tony Parker. Then in the Semis we beat an even stronger Lithuanian team, with Sarunas, Siskauskas, Kleiza… hell, with all of their guys. That was an amazing team. And it was an amazing game too, we were leading by 20 points, and in a matter of moments, we were behind! That’s how good that Lithuanian team was. It was a battle, a tremendous battle, we ended up running away late in the fourth.

Coming into the game against Spain, because we had seen the quality of teams that we had beaten, and we knew we had almost a psychological advantage of knowing that our opponent had all the pressure on them because of expectation, home court advantage, everything else that goes with playing in the home team’s country. We had a sense of confidence. We knew who we were. We knew the things that we had to do to be successful, we knew how we wanted to play, and we had very tough guys. Mentally tough, physically tough, skilled, mature, smart, determined.

Did those two bounces change your entire coaching career?

I don’t know that it changed it for me. But it certainly was a very significant moment.

Did those two bounces change the course of history for Russian basketball?

Without question. This was the first championship for Russian basketball. Of course there had been many for the Soviet Union before that, but the Soviet Union teams were made up of 15 different countries. This championship was in a new era of only Russia. It was very special for that reason, it was the beginning of a mini-dynasty for Russian basketball – remember that we went on to win another medal in FIBA EuroBasket 2011, after going undefeated for the entire tournament before losing to a great French team in the Semi-Finals; and after that, we won the Olympic Qualifying Tournament in Venezuela; and then went to the Olympic Games in London and won an Olympic medal, beating the great Argentinian team with Ginobili, Oberto, Prigioni, Nocioni and many others. That victory in Madrid symbolized and set a new standard for Russian basketball. 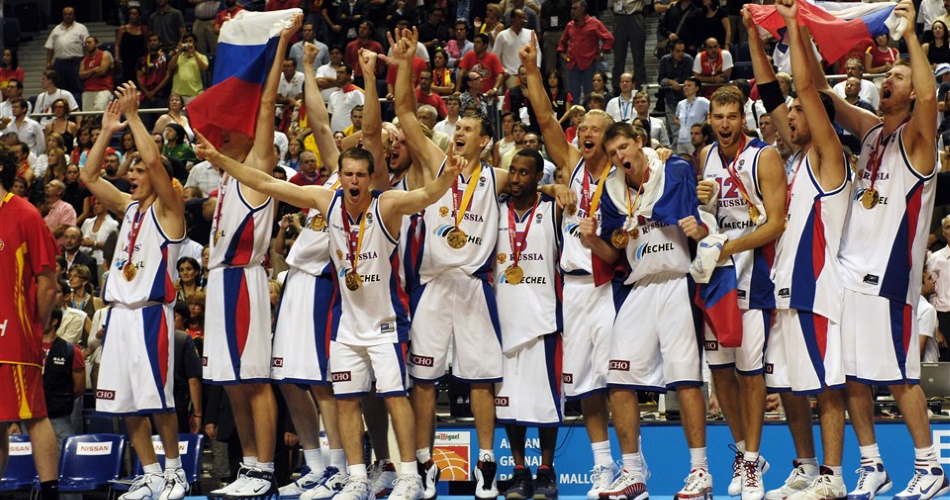 Would you say that was the best Russian team ever, at least in the post-Soviet Union times?

In 2017, Russia reached the Semi-Finals of the FIBA EuroBasket…

…and were so close of making it to the podium. Do you feel like that is a sign that 2007 could happen once again? Do you see Russia climbing the top step of the podium in foreseeable future?

You know how we say it in Russian: ‘Надежда умирает последней.’ Hope dies last.